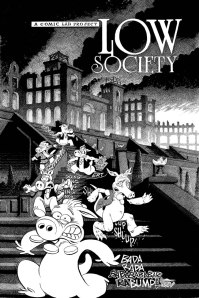 Cerebus built a reputation for parody by liberally borrowing from popular and established comic characters. With Low Society, Multiple Eisner and Joe Shuster award-nominated editor Rob Walton (Ragmop) and the Comic Lab bullpen take you on all-new adventures in aardvarkian insanity featuring appearances from Red Sophia, Moon Roach, Elrod, and more. Featuring an all new cover inked by Dave Sim with backgrounds by Gerhard. Plus a host of pin-ups, laughs and surprises.

The launch party/signing at the Comic Book Lounge in Toronto features a rare appearance by special guest GERHARD (who worked with Sim on Cerebus from issues 65 to 300), editor Rob Walton and the Comic Lab Bullpen. There will be an accompanying art show of the original art from the published issue.

The book will be distributed to comic book shops later this month, but advance copies will be available EXCLUSIVELY at the Comic Book Lounge (587A College Street, Toronto) for this event!

Please note, that while he gave permission to use Cerebus in this project (and his position on how others can use the character is detailed in the preface of LOW SOCIETY) — Cerebus creator Dave Sim will NOT be at the event.

Refreshments will be available for purchase at this event.