What happened to the summer?On August 21 we held the launch party for Reform School Ninja Girls which was a huge success — the original art is still up on display in the gallery until September 5th.

Last weekend we wrapped up Fan Expo Canada for another successful year, and buzz around town is that they had well over 110,000 attendees over four days. It was an exciting weekend for the Lounge, what with our booth at the show, Kevin participating in the Canadian Superhero Renaissance Panel on Friday, 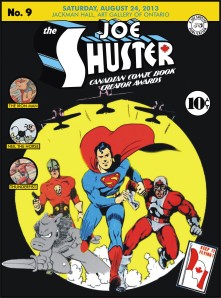 Rachel participating in the Golden Age of Canadian Comics panel on Sunday and the 9th Annual Joe Shuster Awards being presented on the Saturday night at the Art Gallery of Ontario.

On Monday we had an impromptu visit/signing with the fine folks from UK publisher Neil Gibson Comics, including creator Neil Gibson himself. They’ve left some copies of TWISTED LIGHT at the store for sale along with a special offer to those that buy it to get a copy of TWISTED DARK for free either digitally or in print!

Rachel will be enjoying a restful vacation from September 3rd to 19th and we hope she has a great time. Mike Bothelho and Kellam Templeton-Smith will be filling in for her while she is away.

Our next evening event in September is the CEREBUS: LOW SOCIETY book launch on Saturday, September 7th with special guests Rob Walton (editor), Gerhard and the many talented participants in the Comics Lab Project. We’ll have copies of the book well in advance of the distributed copies, courtesy of Aardvark-Vanaheim.

On September 13-15 we’ll be exhibiting at the MONTREAL COMIC CON (look for us at booth 429) and Kevin will be accepting CGC Signature Series requests for the event. If there is something you would like us to bring to the event for you please let us know in advance.

On September 20-22 it looks like Kevin will be driving down to Columbus, OH for Wizard World Ohio to complete the Stan Lee signing that was originally schedule for Fan Expo (unfortunately Stan was not feeling well and had to leave early) and as a result he will be accepting some CGC Signature Series requests for that event as well.

On Saturday, September 28th we have LADIES NIGHT IV, one of our most popular reoccurring events.